On the night to Sunday we were going to try our new tent, a Hilleberg Keron 3GT.

Since Deimos is not healthy we did not want to leave him alone inside so we decided I would try. The temperature was low throughout Saturday about 15 degrees at midday and by evening it dropped steadily.
At 22, I took my downmat (an inflatable mattress with down), my three season sleeping bag and Delta and crawled into the tent. 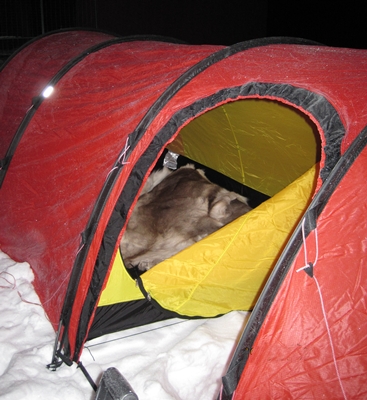 It was now minus 24 degrees. To try and avoid condensation, I wanted to have openings to the vestibules open, but Delta found it quickly and ran back an forth in the tent, so to avoid getting the tent full of snow, I had to close. After having turned around several times in my sleeping bag I finally found a postion that felt good. It was surprisingly warm and I was not cold at all. Some time later, however, my nose was very cold and I had to arrange the sleeping bag so that it protected my face in a way taht made it possible to breathe in a proper way. Delta had lay down on a reindeer hide. Now we were both listening to the winter night sounds.
- Was it a fox or maybe a wolf who sneaked around the tent? The full moon lit the tent and I could see that Delta pricked up her ears, but she growled not, so she relaxed and finally we went to sleep.
About two hours later I woke up because I was cold.  It felt like I was lying directly on the snow. -Shit, why didn't I think of that? We had filled the inflatable mat with hot air when I was inside and now it was almost completely flat because the air had shrunk, so I was actually almost right on the snow. Now I was so cold that I  didn't want to test any longer, so I went inside and into my warm bed but first I checked the thermometer -26 degrees below! On Sunday afternoon I made another attempt.This time I filled the mat really fully outdoors and I also had a regular sleeping mat as reinforcement under. Now I did not freeze at all:)) - and I feel quite sure that I will not freeze even if it might be really cold, not as long as I'm in my sleepingbag.
Upplagd av Unknown kl. 00:40 2 kommentarer:

A high pressure is parked over Sweden and provides clear and cold weather, much colder than you wish for when you are aboout to go camping. 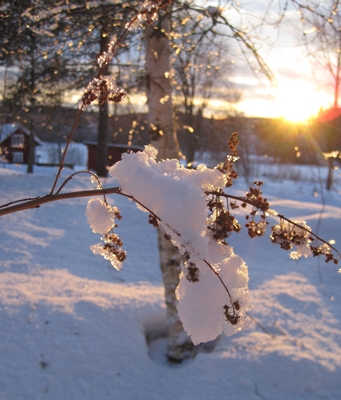 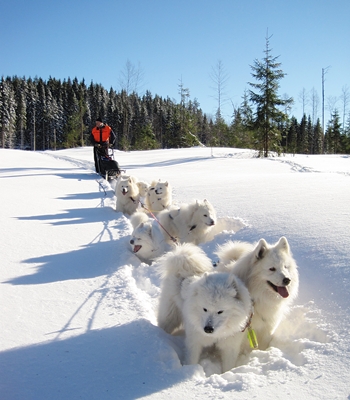 Meanwhile, an emotional low pressure parked at home, Deimos, one of the youngsters from D-litter, has since last Saturday been very ill. On Monday we went to the vet who prescribed antibiotics and pain killers based on the assumption that he suffered from Lyme disease or anaplasma. Deimos had high fever, was stiff and had a very sore neck and back. On Tuesday night the fever rose to 40.9 degrees (his normal temp is around 38.5), although he hadbeen given medicine and he was completely apathetic. By wrapping him in wet towels, we managed to bring down the temperature and he became a bit more alert. On Wednesday we were hopefull, but he did not get better, the temperature was actually slightly lower, but he was in great pain. On Thursday there was another visit to the vet. The test responses showed that there was no Lyme disease or anaplasma. The vet took new blood samples and found that antibiotics had no effect on his high blood values. She now prescribed cortisone based on the assumption that he has meningitis.


Today, he seems somewhat better, the temperature is normal and we think he is a little less rigid and seems slightly less painful.
During the past week, our focus hasbeen to worry about Deimos, walk him, cuddle him, see to that he has been drinking and eating, and so not much effort hasbeen put on planning. Of course, we have also been thinking a lot about what to do now. Until yesterday we were hoping that he would perk up so that he could come with us. Now it is clear that he must stay at home. Before we can leave, Deimos must be much better and we need to be certain that the treatment helps, then remains to find someone who is willing to take care of him until we get home. We hope that we can be able to start the expedition sometime in early March.
Today we have arranged with a spot transmitter wich we will bring. It is our "lifesaver" in that it has an SOS button and it works with the help of satellite broadcasting.  In addition, we will, by pushing another button, to mark our position at least once a day so that anyone who is interested in our trail can see where we are. We hope to be able to update the blog quite often but we know that the coverage of cellular phones is not one hundred per cent so at times it may be sporadic updates.
Bosse on Waern Hoff sails have now been commissioned to sew a sack for the new sledge and  tomorrow night, we had thought we would test to sleep in the tent, but now one of us must sleep inside with Deimos, so it has to be me that tests because Håkan has already been sleeping in a tent during winter. I will probably bring Delta,  it might be good to have some company and maybe a little help to stay warm.
Upplagd av Unknown kl. 14:24 1 kommentar:

On Tuesday came about 15cm snow, so the evening was spent shoveling snow and yesterday it snowed all day and so far reached about 30-35cm. It's snowing still fairly plentiful, and soon it's barely visible that I have shoveled all afternoon today, too. Håkan says it's good exercise:)) - Oh yes, I feel it in my arms, and as it seems to be the only way for me to get some training I believe it's a good thing that it keeps on snowing. 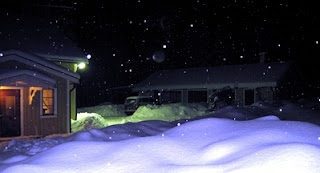 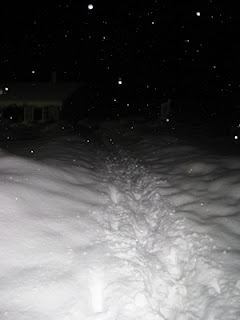 Today came the new sled from Stepphundspann. It looks good,  steady and with strong brakes. 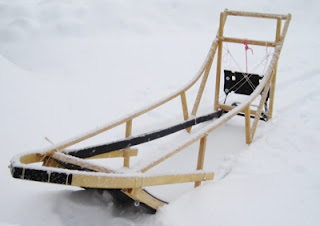 We have come quite far in our planning, and most purchases are made. It remains to make a detailed planning of the diet and to make final additions to the wardrobe.
The tent, a Keron 3GT partially sponsored by Hillberg, will come next week as well as Jerven extreme wind bag, so next weekend it is likely that we will test to sleep in the tent.
The food for the dogs,  Purina Pro Plan will help us to deliver at different places during the expedition.
Fortunately, all females, except one, have passed their heat and the maledogs have started eating normally again. The females  are fit and eager, and after this weekend's test with 14 dogs in front of our new ATV weighing just about 500kg (including our weight),  we are confidently looking forward to the expedition thinking that our dogs will be working well, even if it might be a bit heavy.

Last thursday I went to Bivvilis kennel with both our youngsters, Ergo and Etna, who are to young to come along. They will be staying with Pernilla during our expedition.
Upplagd av Unknown kl. 05:57 Inga kommentarer:

This morning, the wind howled round the corner and the snow whipped against the windows. There was a southerly wind and only -1 degree, but I was still glad not having to crawl out of a condensing wet tent as I woke up. Hopefully it will be as it usually is when we are out on "adventure", just a beautiful and pleasant weather.


At lunchtime, the clouds dispersed and the sun's warming rays made the ice melt and drip from the roof. It was an amazingly beautiful early spring weather.
Recently, nothing special has happened. All my free time I have peeled, cut, boiled and dehydrated vegetables. It takes time. Dehytrating a plate of broccoli, turnip, onion or celery in a conventional oven takes 4-8 hours depending on how thin the pieces are.

On Wednesday the maps, which we had ordered, arrived and we have begun planning which route to take. 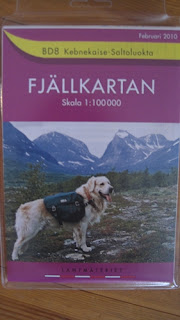 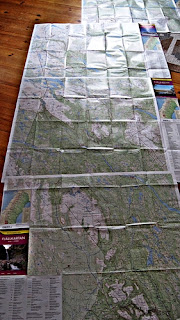 Unfortunately, the sled which we had intended to use has broken so we had to order a new one and was lucky that  Dominique in Stepphundspann had two sledges ready at home. The sled that we ordered is a Skaule purpose-built for mountain trips. 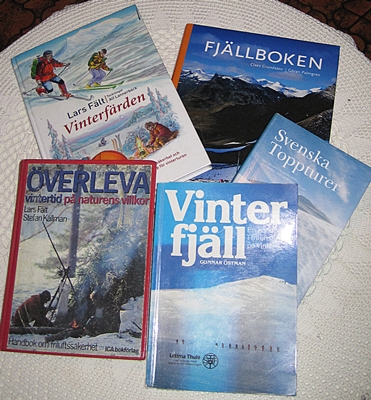 On the bedside table is no longer criminal books but several books on mountain trips with much useful reading. Every night  we read and plan a bit before falling asleep. How we can sleep depends on which of the books we read, if it was about mountain safety it's  likely that we have nightmares about beeing hunted by the snow storms throughout the night.