Just as I write this sitting in the car and Hakan have just driven past Dorotea, on the way up to Kiruna to get Christina and all the dogs. They've had a few eventful days of snow storms and many reindeers, but
they did it. All the way up to Treriksröset.

The day after they arrived at Treriksröset was the blizzard and the day before. The dogs have floppy in very fresh snow, but the team is unprecedented. Hakan and Christina are so incredibly impressed by the
dogs' performance.

Many thanks to Mia Karaca who drove the car up to Ostersund.

Think this is the last time I write in my blog, next time it's Christina or Hakan sitting at the computer.
Have a great day and take care of each other! THANKS AND BYE!
/ /
Pernilla
Upplagd av Unknown kl. 01:53 Inga kommentarer:

Yesterday (Friday) Christina and Hakan left Abisko Mountain Station to go the final 170 kilometers to Treriksröset.Unfortunately, it is already spring in Abisko, so we keep our fingers crossed that there is
still snow all the way up and down again to Kiruna, where they must be picked up for departure down to Molkom again.

The last few days have been in the middle of no-man's land, but despite this they have faced many dog ​​sled and hit a lot of holiday hosts. As everyone is as friendly and pleasant. At one point when they would cross a lake, it was clean traces everywhere. Both Christina and Hakan had heart in their throats when they would take the dogs through. The fact was that they did not hit any reindeer and dogs behaved extremely well.

In another place was quite sudden snow changed color to cafe latte.Hmm ...wonder they thought so at the next cabin, they asked what happened.When the landlord told that there is sand from the Sahara that had blown in over the mountains.

Today, they will pass Torneträsk, unfortunately, that they must now stay on the
snowmobile trails depending of the snow. So it will not go to / m, then as soon as they step off the tracks they sink into the snow which does not bear any longer.Now it's not so far away and it is fortunate.

Of course they passed Sälka and took  another picture of Sälka front Sälka:)
Many dogs that has the same names as the nature reserve they have.

They figure that the last distance will take a week. And hopefully we will get a new report then. But it isn't sure as the mobile calls doesn't go tru at all time.
/ / Pernilla
Upplagd av Unknown kl. 16:59 1 kommentar:

At this writing  our adventurers  is enjoying a three-course dinner in Saltoluokta, where they have rested the dogs and themselves since Sunday evening. They figure to go again tomorrow morning early, and hope that
after two days of heat wave that there should be snow left all the way up to the final destination. Upon arrival, it rained: (

Yesterday (Sunday) they drove away Rapadalen to Saltoluokta, then the trail went over a steep mountain Decision Christina and Hakan to save the dogs as much as possible, they drove around, instead, this was 23 km extra, but the dogs loved the ground that was variable with no major differences in elevation.

The last few days, they have been up for about 60 km each day, it has been perfect weather and super nice terrain. Just such a terrain that dogs love so they have average of 10 km / h.

First reindeer they have now encountered, Christina would try to take pictures, but of course got the dogs right at this moment get wind of the reindeer. Luckily, Christina got a stop on the team is well ahead
of the first reindeer.

They met Laila Nilsson and his family reside in Kvikkjokks mountain.
Laila managed to take some really nice pictures of them and has sent them to me.
THANKS, FIRST IMAGES AFTER they went! 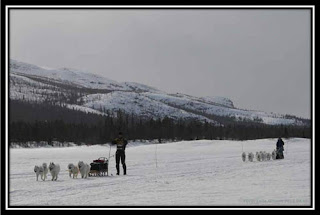 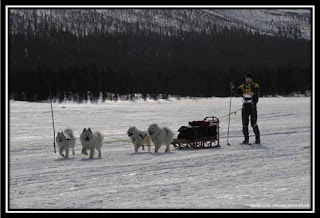 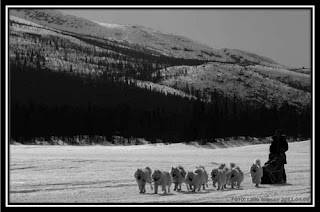 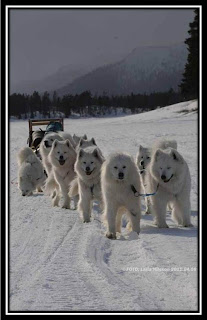 A lot of coffee breaks has indeed Christina and Hakan had time for, hm really wonder if it might be good for weight, Hakan. When they drove past Pårtestugan (Saturday) was they were met by Berta, who is hosting
the cottage. Invited for coffee and cakes, and yesterday they stopped at the cottage in Sitojaure Anders gave us homemade carrot cake and coffee ...

Looking ahead, there will be mountain huts every mil so from now it willnot go as much gasoline (as they drove through the nature reserve so it can not burn wood) to get to the water for the dogs.
That's it for this time / / Pernilla
Upplagd av Unknown kl. 11:52 2 kommentarer:

Yesterday arrived Christina & Hakan to Kvikkjokk after a tense down hill driving. Hakan crash two times but as usual there is not much that can harm that man. He is okay and his sleigh is well.

They've had a nice track, cool and nice weather.

A small fault running through 2 km could also be yesterday. At the west mountain was Kungsleden very bad marked, but with Håkan as co-driver came soon back on track.

During yesterday they had something to feast your eyes on the entire voyage to the northwest and south of them were Sarek. They have taken pictures of Sarek infront Sarek to be very exciting to see.

Christina and Hakan with dogs have run 50-60 kilometers a day now when it's cold,
and the dogs enjoy being out in the wilderness.

The day before yesterday  they drove away Ammarnäs in the afternoon, after telephone contact with Matti Holmgren who recommended them to drive to the east instead of west due to the input possibly snow storm coming. During Monday the drove just the only 10 kilometers when it was too hot for the dogs and the sleds again fully loaded, it was heavy.

When Christina and Hakan went to bed it was starting to freeze again and they hoped that Tuesday's execution would be easier when the tracks again was hard. But  in the morning when they opened the was
tent it had snowed again, this time only 3-4 centimeters.

Snow, little rain and a sun that shone brightly in the neck (felt like 20 degrees) was on Tuesday the
weather. Dogs keeps going well, unfortunately it was again in some places no snow on some places, but with some tricks and quirk was driving this, too.

Christina and Hakan had a pleasant run down when they left the mountain to go down into the valley
this time too:) But only until they came to a lake that began with a small
stream. On the stream it looked like it was frozen (they thought) with the snowmobile trail, so it was just to go over.The dogs showed that they would certainly not do, and explanation for this was that it was steeping in water and snow mixed togheter (sometimes I think we should trust the dogs). Once they got over
sleds and dogs, were both Christina and Hakan soaked.

They had 5 kilometers to go to Adolfström where they knew there would be a small country trade. There
was anchored dogs up and Hakan would buy some sodas, the lady who owned the shop has
taken pictures of our adventurer, and would during the day put the image on
the website http://www.adolfstrom.com/

It turned out they had a loft for rent, and then it was time to return to dry shoes and clothes thought
Christina and Håkan that it was time to take an overnight inside, who knows maybe
they would salubra at they had been married for 26 years (April 5).

This morning (Wednesday), I know that they would try to get away early before it gets too hot for the
dogs I've the weather forecast up on the northern broad promised degrees above
freezinguntil Friday.Nothing that they look forward to.
/ /
Pernilla
Upplagd av Unknown kl. 23:02 Inga kommentarer:

Today they left  Ammarnäs hostel, where they filled up with both food to themselves and to the dogs.
The point was not that they should have stayed here the night between Sunday and Monday but weather report promised rain, they did not have all the equipment wet again when for many nights to come will have to do quite a solo.

They had nice run yesterday, but a bit warm. In the afternoon they left the mountains to come down in the valley when it was cooler and clearly showed the dogs a new ignition. They can tell that they work better at lower temperatures. So would it be too hot now, they will run in the early morning and late at night, resting during the day.

When they leave Ammarnäs, they are not sure which of the routes they will take it there's two, King's Trail and Pajala trail. But we will soon notice. The next food depot is Jäkkvik.

The heat has also been hard on the snow layer up but the hope is clearly that it should remain in snow so they can complete their trip.